Things what I writ

I sometimes write nonsense about things to try and sound clever 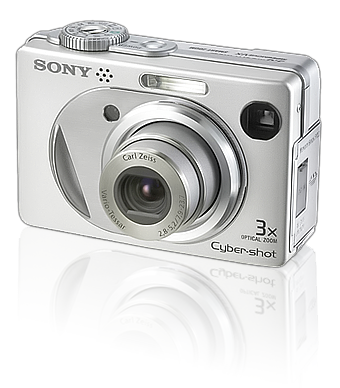 after a considerable time monkeying around with manual SLRs, 35mm, APS, polaroids and other format film cameras I did what I usually do when I’m investing in new technology and spent about a year thinking about it, after which I spent about a year researching and reviewing it, by which time every decision I had made was obsolete, and so ended up in Dixons in Heathrow Airport on my way to California to make up globalization strategies and decided that right here, right now, is where I should fork out for a digital camera.

And fork out I did. I already knew that I would end up buying a Sony, following a long history with using their products without a hitch, and so I’d narrowed my choice down to about, well, 1 camera. It was the very spanky Sony Cybershot DSC-W1 which ticked all the right boxes for me, even though I didn’t know what all the boxes meant yet. As I approached the counter without my glasses on, I had no idea whether they had one and as I tripped over a wheelie suitcase belonging to a well-dressed Belgian I was losing the urge to part with wads of cash, but on closer inspection, dodging the attention of the staff, I saw it on the shelf, trying to peer out from between the Casios and Fujis and Canons.

Now then of course, 4 years later I can now buy my Sony Alpha 300 for about that much money, but at the time, it was worth it and for the next 3 and a half years it was the only camera I ever needed. My little Sony. And I still use it in a number of circumstances where a DSLR just isn’t right. Like when you want to stick a camera in people’s faces and run away quickly. Or you might be on the beach. Or you cant be bothered to carry a bag full of kit around. It was the best 249 quid I’d ever spent and it got me on the path to digital photography. No, hang on. I had a Sharp GX10 phone before the camera. I suppose that was my first digital camera, but if that poxy piece of hand-hardware qualifies as digital camera equipment then I’m a middle-aged fat balding old misery.